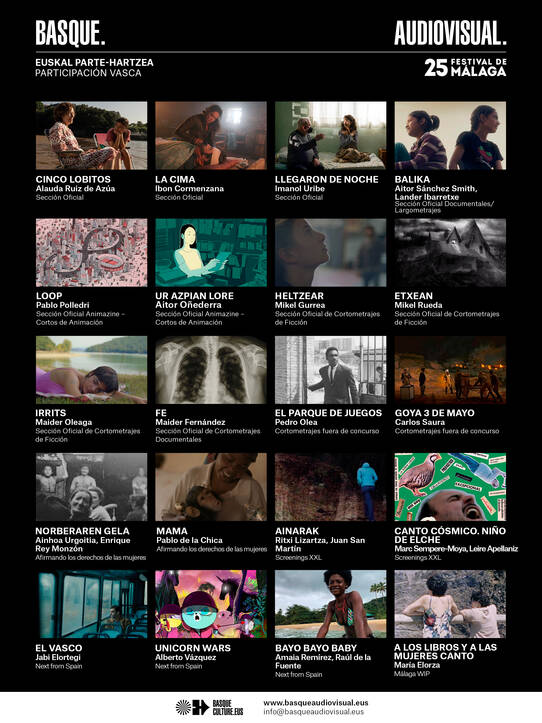 The Malaga Festival has been, for years, one of the main showcases of cinema at a national level, and a place where Basque filmmakers have always had an important and outstanding participation. On this occasion, both the festival itself and MAFIZ, its industry zone, have selected 19 works to participate in different sections.

It should be noted that on Sunday, at the Biznaga de Honor award ceremony for Huesca filmmaker Carlos Saura, the festival has decided to highlight and screen two Basque works: the short film 'Goya 3 de Mayo', by Carlos Saura, produced by Gaizka Urresti (Urresti PC, Aragón TV and A contracorriente), and the film 'Cinco lobitos'. The latter, which arrives in Malaga after its successful world premiere at the Berlinale, is one of the three films that will compete in the Official Section. It will coincide with the film 'La cima, by Ibon Cormenzana (Arcadia Motion Pictures, Dorothy Films, Lazona Films, Aixerrota Films and Noodles Production), and Llegaron de noche', by Imanol Uribe (Nunca digas nunca, Bowfinger International Pictures, Tornasol and 64-A Films). Likewise, in the Documentaries/Feature Films Official Section, 'Balika' will be presented, the latest project by Aitor Sánchez Smith and Lander Ibarretxe (Nightwalk Films and Vereda Studio).

Within the Animazine – Animation Short Films Official Section, the Festival has selected the short film 'Loop', by Argentine director Pablo Polledri and the production companies Uniko Estudio and Maniac Planet. 'Ur azpian lore', directed and produced by Aitor Oñederra, and which is part of the Kimuak 2021 catalog, will also participate. Oñederra's is not the only work belonging to the Kimuak catalog that festival attendees will be able to enjoy. The Official Fiction Short Film Section will also be able to see 'Heltzear', a project directed by Mikel Gurrea and produced by Xabier Berzosa, from Irusoin.

In addition, in the same section we find 'Etxean', by Mikel Rueda, created to participate in the Itxitik call that Zineuskadi launched during confinement; and 'Irrits', a short by Maider Oleaga together with the producers Galapan and Sumendi. In the Official Section of Documentary Short Films we find the latest work by the San Sebastian filmmaker Maider Fernández, 'Fe', from the production company Apellaniz and Sosa. Likewise, out of competition, the short films 'El Parque de Juegos', by Bilbao-born Pedro Olea, and the previously mentioned 'Goya 3 de Mayo' will be screened.

For its part, in the section Affirming the rights of women we will have the opportunity to see the screening of the work 'Norberaren gela', by Ainhoa Urgoitia and Enrique Rey Monzón, and 'Mama', by Pablo de la Chica and produced by Diego Urruchi (Media Attack), which arrives after having won the award for Best Documentary Short Film at the last Goya Awards gala.

The Basque presence within MAFIZ will also be very notable. On the one hand, among the projects received by Basque.Audiovisual, 'Ainarak', by Ritxi Lizartza and Juan San Martín (Maluta Films), and 'Canto cósmico. Niño de Elche’, by Marc Sempere-Moya and Leire Apellaniz (Señor & Señora), have been selected to be screened at Screenings XXL.

On the other hand, the Next Form Spain section will feature the latest work by Jabi Elortegi, 'El vasco', an international co-production by Pausoka, together with Oeste Films and Prisma Cine. The feature film 'Unicorn Wars', by Galician director Alberto Vázquez, produced by Uniko Estudio, and 'Bayo bayo baby', a work by Amaia Remírez and Raúl de la Fuente, produced by Kanaki Films, will also be presented in the same section. For its part, the film A los libros y a las  mujeres canto', by the director Maria Elorza and the production company Txintxua Films, will participate in the Málaga WIP section after winning the 2021 ZINEBI Networking Award in Bilbao.