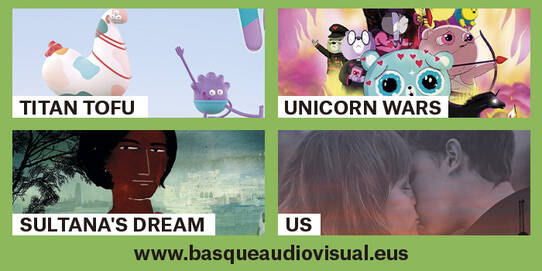 The strength of Basque cinema is evident, once again this year, with the implementation of projects that continue to receive awards, critical acclaim and audience praise, as much at festivals as in cinemas and on streaming platforms.

The strength of Basque cinema is evident, once again this year, with the implementation of projects that continue to receive awards, critical acclaim and audience praise, as much at festivals as in cinemas and on streaming platforms. A good illustration of this are the successes many of the titles presented this year are garnering, such as 'Cinco lobitos', 'Irati', 'Unicorn Wars', the Netflix series 'Intimacy' and the recently released 'Tetuan'. Their brilliant run of the most important festivals on the national and international scene has even included premieres in such select settings as the Annecy Festival and the Berlinale.

This time, Basque cinema and Basque. Audiovisual., the commercial brand behind the internationalization of the Basque audiovisual sector, an umbrella designed to promote Basque productions and companies in markets and festivals around the world, will land at the Ventana Sur with a total of four projects, from animation to fiction.

The Bilbao-based production company Uniko will be, without a doubt, one of the great protagonists at the state level. On the one hand, the Bilbao company will attend with the film 'Unicorn Wars', one of its big bets for this year, and which is generating very good reviews from critics and the public. The latest work by Alberto Iglesias had its world premiere in the Official Section of the 2022 Annecy Festival, and has also participated in prestigious film events such as the Sitges Festival and the Animation Is Film festival in Los Angeles. Nominee for several Goya Awards, it is an international co-production of Uniko, Galician company Abano Producions, and the French companies Autour de Minuit and Schmuby; it narrates an ancient, metaphorical war between bears and unicorns. At the same time, it delves into an internal war between its two leads, the Azulín y Gordi brothers, for the love of thier mother. Iván Miñambres, producer, will host a talk entitled 'Unicorn Wars: the epic of producing animated war films with bears and unicorns' on December 1, from 5:30 p.m. to 6:30 p.m. in Auditorium 2. In it, Miñambres will explain the production process of this feature film, analyzing the challenges and processes developed in this ambitious international co-production.

Thanks to the Annecy International Animated Film Festival, and its MIFA market, 'Sultana’s dream' will also go to Buenos Aires, one of the five Latin American titles selected to participate in the Work in Progress 2022 of Animation! This time it is an international co-production of Uniko and the Madrid production company Gatoverde Producciones, the Galician Abano, the Norwegian Mikrofilm AS, the Italian Stemo Production and the German Vamos Animation. The work will reach the Argentine market after receiving the TorinoFilmLab Audiences Design Award from the European Work in Progress Cologne, and after being selected to participate in the Film Bazaar, the IFFI – International Film Festival India Market. There, the project by San Sebastián director Isabel Herguera was selected within Film Bazaar Recommends (FBR). The work is based on an Indian feminist tale written in 1905 by Rokeya Hussein, and tells the story of Inés, a young director who will embark on an initiation journey through India.

Finally, producer Iván Miñambres and his Uniko team will also attend the event with the project 'Titan Tofu', by director María Luquero. This time, the project will participate in the out-of-competition section Anímate! by Spanish Screenings. This will be the second time the project has been presented in Latin America, (the first was at the latest Pixelatl). Likewise, this animated series received the award for Best Young Creator Series Project at the Weird Market last year.

In addition, the Proyecta section, a joint initiative of Ventana Sur, the Marché du Film and the San Sebastián Festival created with the aim of promoting co-productions between Latin America and Europe, has selected the project 'Us', by Helena Taberna and Lamia Producciones, for this edition. This fiction feature film appeared in the Europe-Latin America Co-Production Forum held in Donostia last September. The film tells the story of a great love beginning with its end. It is a trip back in time, showing the lights and shadows of a relationship.

In addition, within the Spanish Screenings On Tour initiative, which aims to strengthen and open new opportunities for the Spanish audiovisual industry internationally, several Basque works have been selected to participate in different sections. On the one hand, among the 18 works selected to be present at the Market Screenings we find 'The Rite of Spring'. The latest work by Fernando Franco, with the participation of Kowalski Films, was presented this year in the Official Section of the San Sebastian Festival.

Likewise, with the intention of continuing to promote state titles from different years, remakes of 12 films will be carried out, among which we find four Basques: 'Mama no enRedes' (2022), by Daniela Féjerman and with the collaboration of Bowfinger International Pictures and EnBabia Films; 'García y García' (2021), by the Navarran director Ana Murugarren (Blogmedia); ‘El ataúd de Cristal’ (2017), by Haritz Zubillaga and the production company Basque Films; and, finally, 'Pagafantas', a film by San Sebastián director Borja Cobeaga and with the participation of Sayaka Producciones.