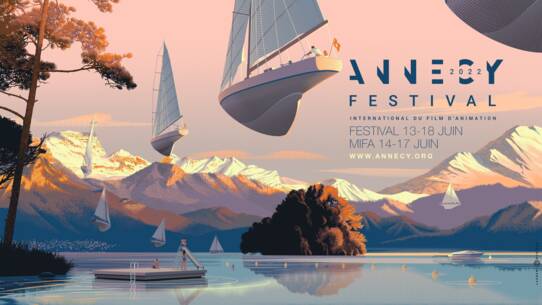 Today is the launch of the Annecy festival, the world’s most important one when it comes to the animation industry, and it does so with important news for Basque film. The festival has chosen the film ‘Unicorn Wars’ for the Official Section and ‘Los demonios de barro’ to compete in the Official Section Contrechamp Feature Films in Competition, which will mean the world premiere, of both films in an incomparable setting.

As far as 'Unicorn Wars' is concerned, it should be noted that the same festival already showed its interest in the film by Galician director Alberto Iglesias in 2021 by selecting the project to participate in the Work In Progress of the MIFA market. Produced by Abano Producións and Uniko, and by Autour de Minuit and Shmuby Productions in France, it tells of the ancient war between bears and unicorns. At the same time that the film addresses this conflict, it explores an internal struggle between its two protagonists, siblings Azulín and Gordi, over their mother's love.

On the other hand, in Contrechamp Feature Films in Competition the film 'Los demonios de barro' will compete, a work directed by the Portuguese director Nuno Beato. It is an international co-production by the Sardinha Em Lata, Marmita Film, Caretos Film and Basque Films (from Bilbao) production companies. It tells the story of Rosa, a hard-working and studious girl who is a promising member of her company and whose life changes after the death of her only relative, her grandfather. The protagonist decides to put everything to one side and tries to undo all the mistakes he made.

In addition to with ‘Unicorn Wars’, the production company from Bilbao Uniko will go to the International Animation Film Market (Mifa) with other important projects such as the short film ‘Loop’, directed by Pablo Polledri and which has achieved numerous acknowledgements in national and international markets. It shows the reality of a society in which each human being repeats the same action time and time again.

Likewise, it will also the potential interested partners ‘El sueño de la Sultana’, a film by Isabel Herguera which tells three stories that take place in different countries but are interwoven, and a new project they are developing called‘Nora y la dama de Anboto’. This last film tells of how the protagonist, ignoring her grandmother, goes into the forest close to the family farm where, to her deep frustration, she is spending her holidays. There she will meet strange characters, who she will need in order to return to the world of humans.

On the other hand, Dibulitoon will offer material related to the film ‘Las vacaciones de Yoko’, which is currently in the production phase and shows how Mai, Oto, Vik and Yoko, who are separated for the first time to spend the summer, discover that wherever there are children, there will always be willingness to play. They will also go to the event with ‘Winnipeg, el barco de la esperanza’, which is in the development phase and is based on the graphic novel written by Laura Martel. It tells the story of a seven-year-old girl and her father, who are escaping from the war in France and who, after experiencing very tough moments there, board the ship ‘Winnipeg’, led by Pablo Neruda, and travel to Chile.

Talka Records and Fermin Muguruza will also attend this important market, which brings together the sector’s most outstanding professionals, to seek the necessary financing to complete the film ‘Black is Beltza II: Ainhoa’. This second instalment focuses on Ainhoa, the daughter of Manex, the protagonist of the first film. Likewise, in Lotura Films they will offer information about the series ‘Kima & Amik’, currently in the production phase and with which they went to the Animation Production Days (APD) and were selected to go to the prestigious Cartoon Forum market. It is a series about two cousins who, despite having very different lives and completely opposite tastes, always find a way to play and have fun together.

Similarly, last year, during a short film mentoring programme, Zineuskadi awarded to the project ‘Azkena’, by production company Izar Films, an international market trip that will materialise next Wednesday at 10:30, with a pitching session alongside Alca-Nouvelle Aquitaine. ‘Azkena’, directed by Ane Inés Landeta and Lorea Lyons, carries out a deep reflection on motherhood. The aim of the session is for these filmmakers to present their project to an international audience for the first time.