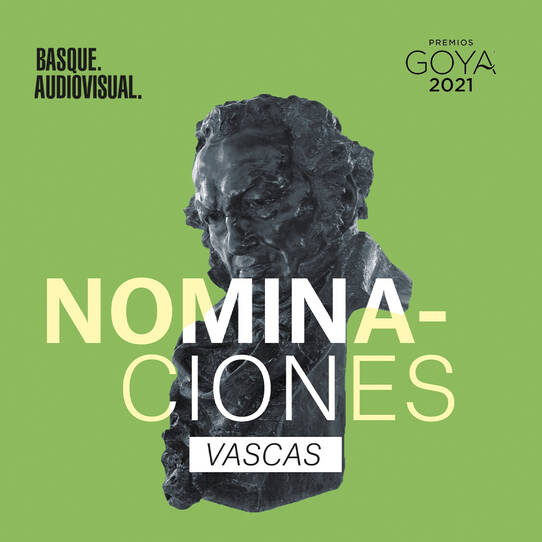 Basque cinema continues to have reasons to celebrate. Over the past year, a difficult one for the industry because of the pandemic, Basque film professionals have continued to receive notable recognition at several festivals and galas.

The Goya Awards will be celebrated on 6 March, and their nominations have once again evidenced the outstanding level of Basque filmmaking. The Academy has especially recognised the talent of our industry's technicians, who picked up eight of the nine nominations for the film 'Akelarre', among others. The work of young filmmakers like the Bilbao-born director David Pérez Sañudo and actresses Amaia Aberasturi and Jone Laspiur have also been singled out.

The latest film by Argentinean director Pablo Agüero, 'Akelarre', produced by Koldo Zuazua (Kowalski Films), Iker Ganuza (Lamia Producciones), Gariza Produkzioak and La Fidéle Productions, is the Basque film that has received the most nominations, with a total of nine. This historical drama, inspired by a 1609 witch trial in the Basque Country, was filmed in Basque and Spanish, and premiered last September in the Official Selection of the San Sebastian International Film Festival.

The crop of nominations received by debut director David Pérez Sañudo also deserves special mention. ‘Ane’, which explores the boundaries and communication between a mother and her missing daughter, earned five nominations. The Bilbao-born filmmaker's debut feature film will compete for the biggest prize of the night, the Goya Award for Best Film. Likewise, Pérez Sañudo is competing in the Best New Director and Best Adapted Screenplay categories, along with Málaga-born Marina Parés. Additionally, Patricia López Arnaiz will compete for the award for Best Leading Actress, and Jone Laspiur is up for Best Breakthrough Performance.

The third Basque feature film singled out by the Academy is 'Baby', a film that depicts the life of a young drug addict who, unable to look after her baby, decides to sell it to a strange woman, and soon regrets her decision. The film directed by Juanma Bajo Ulloa, produced by Frágil Zinemak and distributed by Latido Films, premiered at the Sitges Festival and has participated in several prestigious festivals. It has received two nominations for Best Director and Best Original Score (Bingen Mendizábal and Koldo Uriarte).

But not only feature films will be the focus at the gala celebrated on 6 March at Málaga's Soho Theatre: two Basque short films are in the running to win one of the coveted 'cabezon' statuettes.

Alberto Vázquez continues to score with his short film 'Homeless Home', produced by Iván Miñambres and the production companies Uniko Films and Autour de Minuit, which has been nominated for the Goya Award for Best Animated Short Film. The film premiered in the Official Selection of the Annecy International Animation Film Festival, the world's leading animation festival, and won the Jury Award, making it the first Spanish short film to win this distinction. It was also selected by the same jury to compete for the Oscars and makes it to Spain's premier film event with more than 40 world-class international nominations. The film was inspired by the medieval fantasies that Alberto Vázquez read as a child and features, through the love triangle between an ogre, an orc and a witch, the return of many characters to their place of origin in the wake of the economic crisis.

In turn, the latest short film by Ana Serna and Paula Iglesias, 'Solo son peces', is up for the award for Best Documentary Short Film. The filmmakers present the story of Teslem, Dehba and Jadija, three Algerian women who work in a fish farm in the camps for the Sahrawi refugee population.