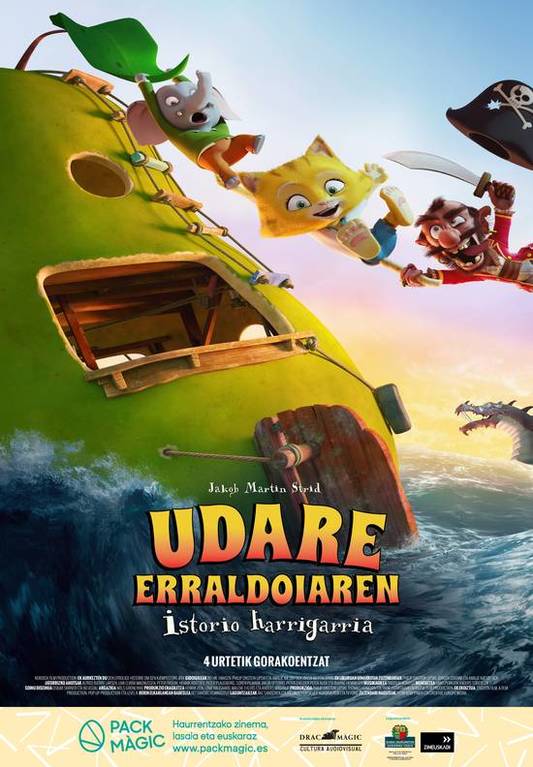 The Zinema Euskaraz program closes the year with two commercial premieres and its usual film workshops for young people.

In order to promote the use of Basque as a vehicle for cultural communication, the Department of Culture and Linguistic Policy of the Basque Government continues to offer children's films such as The Incredible Story of the Giant Pear (Denmark) and more familiar works such as Ploey (through Zineuskadi). Iceland-Belgium) available to the public.

The incredible story of the giant pear (Drackmagic), which will premiere in Euskara on Friday, November 23, has received the Robert Best Children's Film and Best Adapted Screenplay awards from the Danish Academy. In its extensive tour of festivals, the following stand out: the Generation section of the Berlin International Film Festival, the Kids International Film Festival of the TIFF and the Europa Junior prize at the Seville Film Festival. The animation is aimed at both children and adults, as it conveys important values ​​such as loyalty, friendship and daring. The audiovisual adaptation is based on the book of the homonymous title of Jakob Martin Strib, writer and draftsman. The book has a very particular style and a certain surreal tone. This film tells the story of the elephant Sebastian and his friend the cat Mitcho. The two live together in Sunnytown, a place where everything is usually very quiet One day, friends go fishing to the port and discover a bottle containing a seed and a message from the Mysterious Island. They reject this call to adventure but will end up making an extraordinary trip to rescue their friend and mayor, JB.

Ploey it will also arrive in December at theaters, a film that tells the beautiful story of a young bird that can not yet fly when its family migrates in the fall. He must survive the Arctic winter, the vicious enemies and himself to join his family next spring. Along the way, you will meet new friends from very different species that will help you meet your goal. But ... Can the little bird know his family and his true love?

Also, the Durangoko Azoka and the Zinegabonak program are back with projections in Basque and film workshops for the whole family. In Durango we will be on students' day, December 5th, offering a Foley workshop for teenagers. As for the Zinegabonak program, we can anticipate that it will be held from December 26 to 30 in the cinemas of San Sebastián, Bilbao, Laudio, Pamplona and Urruña with the collaboration of Eitb and EZAE. We will announce the program in the coming weeks and will be on the Zineuskadi website.