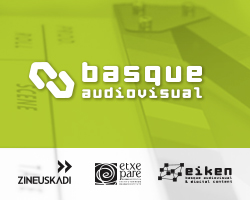 The European Film Market of the Berlinale, which will take place from February 15th to 23rd, 2018, will once again host a large number of Basque companies that, under the Basque Audiovisual brand, will have their own space at the ICEX stand at the Martin Gropius Bau (# 24) thanks to the collaboration of Zineuskadi with the Etxepare Institute and Eiken Cluster.

In this space, hosted in the Cinema from Spain area, a catalog with 29 film projects will be distributed, of which 14 are under development, 8 are in some production phase and 7 have been finalized and / or premiered in 2017. In total , the publication includes the works of 19 production companies: Amania Films, Arena Communication, Archetype Communication, Baleuko, Barton Films, Blogmedia, Demeter Films, Dibulitoon, Doxa Productions, Euskadi Movie AIE, Kanaki Films, Kote Camacho, Kubelik Films, Lamia Productions, Laniakea, Sr & Sra Producciones, Talka Films, Taui Media and Txintxua Films. Among the works represented are 11 documentaries, 5 animated feature films and 13 fiction feature films.

On the other hand, a Basque production will participate in the 15th edition of the Berlinale Co-Production Market, which will be held from February 17 to 21 in the German capital. This is the project ADVANTAGES OF TRAVELING BY TRAIN directed by Aritz Moreno and produced by Morena Films with Señor y Señora. Of the 326 projects submitted to seek co-production, 21 of the final selected have a budget of between 750,000 euros and 6 million euros. It should also be noted that they have 30% of the insured financing.

Zineuskadi will work to strengthen ties with European Film Institutes, International Funds, Film Commissions, Sales Agents, Programmers and Industry Managers of international film festivals with the intention of continuing to promote Basque audiovisual and its talent in the international film scene. He will also be present at important events such as the European Film Forum, whose central theme will be "The future of MEDIA, connecting Europeans through cinema". The Film Commissions of Euskadi will also be represented in the market for the first time thanks to the Film Basque Country brand. This participation supposes the official presentation of the platform and the opportunity to find new promotion channels to attract films to the Basque Country.