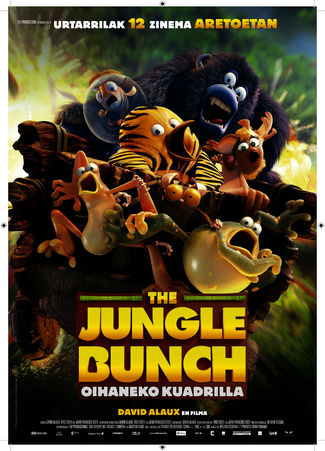 Thanks to the Zinema Euskaraz program promoted by Zineuskadi, tomorrow, January 12, 'Oihaneko Kuadrila' (France, 97 ') will hit theaters in its Basque language version. As of tomorrow, the film will be able to be seen in the cinemas of Álava, Bizkaia, Gipuzkoa and Navarra.

Presented at the prestigious Annecy animation film festival and in the Junior Europe section of the Seville Festival (for children from 3 to 12 years old) 'The Jungle Bunch. Oihaneko Kuadrila 'adapts the 3D animation series' The Jungle Bunch to the Rescue' (Les As de la jungle), created, written and directed by David Alaux, Jean-François Tosti and Éric Tosti.

'Oihaneko kuadrila' transmits good and important values ​​to the little ones, highlighting the solidarity, friendship and strength of the collective and contains fun cinematic references to the popular sagas of 'Indiana Jones', 'Mission: Impossible' and 'Rocky' . This family film tells the story of a group of animals that fight against injustice in the heart of the jungle. Maurice, a penguin who believes a powerful tiger will be accompanied by his son Junior, a tiger fish, in addition to Miguel, a strong and affectionate gorilla, and Batricia, the bat that fears the darkness The aim of the Zinema Euskaraz program is to make films of recognized cinematographic quality available to citizens in Basque, using Basque as a tool of cultural communication and promoting the normalization of Basque in leisure.

In 2017, the program has contributed to the dubbing and promotion of 12 films. Most of them have already been released, but in the coming months two new titles will be released: Early Man and La Abeja Maya, the honey games.

These are the cinemas where 'Oihaneko kuadrila' releases in Basque: