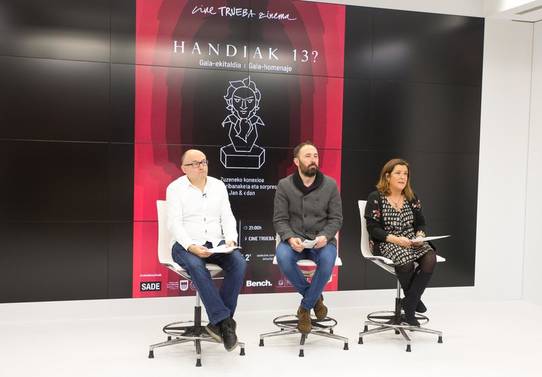 Thanks to the collaboration of the Provincial Council of Gipuzkoa, the San Sebastian cinemas have organized an interactive event that will feature photocall, direct connections with the 'Handia' team, Estrella Vallejo's presence at the micro, prizes and surprises, as well as a lunch for all the attendees. The party will be titled 'Handiak 13?', In tribute to the 13 nominations to the Goya received by the Basque production The Provincial Council and SADE want to support 'Handia', the most nominated film of the Goyas, as well as to encourage 'Nur eta herensugearen tenplua', nominated for the best animated film The event will take place next Saturday, February 3, starting at 9:00 pm, at the Cine Trueba Zinema. Tickets, which will be priced at two euros, can now be purchased at sadecine.com and at the Trueba box office

The Goya Awards gala will have its replica in Donostia with a tribute party organized by SADE and the Provincial Council of Gipuzkoa in Cine Trueba Zinema. In this way, both entities want to support 'Handia', the most nominated film of the Goya, as well as encourage the rest of nominees linked to Basque cinema: 'Nur eta herensugearen tenplua' by Juanba Berasategi, who has received the EZAE Prize of the last edition of the Zinemaldia, 'Abracadabra', by the Bilbao director Pablo Berger, and the BSO by the San Sebastian composer Alberto Iglesias for the film 'La Cordillera', among others. The event, in which attendees will enjoy live broadcasting of the awards of the Film Academy, will take place on Saturday, February 3, starting at 21:00, and will be titled 'Handiak 13?' , in tribute to the 13 nominations to the Goya received by the Basque production. Among the many activities of the night, attendees can be photographed in the "giant Altzo" universe and enjoy an interactive party in which there will be no shortage of live connections with the 'Handia' team in Madrid, the presence of Estrella Vallejo that will take us to the last of what happens in social networks and even a pool that will be launched among the attendees. The winners of this pool will opt for a valid gift card in all the SADE cinemas to exchange for tickets. In addition, the collaboration of Keler, BENCH and Zinema Corner will provide for the winners and provide surprises and gifts for all participants in the event. The price of the tickets, which can already be purchased on the SADE website and at the cinema box office, will be two euros and, depending on the sale of tickets, the second room of the Trueba will be enabled to host only the retransmission. of TV. It has been considered to give a reduced price to the event with the aim of attracting the largest number of public. In this regard, Coro Odriozola, general director of SADE, has encouraged during the presentation of the event to all "moviegoers, and especially family and friends of the film teams, to leave their homes and sign up to Quote". Odriozola announces "a more fun and interesting relay of the Goya than ever" to celebrate the "impressive success of a film shot in Basque that drives the Basque industry so hard". The Deputy of Culture, Denis Itxaso has highlighted the level of the film industry, its professionals and the high degree of cinephilia existing in Gipuzkoa. "Successes like Handia's are a stimulus for our film industry that we must continue to promote and support. Handia has been produced by companies and professionals from Gipuzkoa and is a clear exponent of the 'Gipuzkoa' brand, of our language, and how a gap can be achieved in the international map, enhancing what is our own, both from the point of view of talent and of the productive structure. Therefore, celebrating this success with a party open to the public is an encouragement and support for the film industry, "they explained. And, in addition to the 13 nominations to the Goya, 'Handia' is preceded by numerous successes, including the Special Jury Prize in the last edition of the Zinemaldia. José Luis Rebordinos, director of the International Film Festival of San Sebastian, also present at the presentation of the event, also wanted to support this festival of Basque cinema and highlighted the work of the Zinemaldia to "enhance the presence of our cinema in the international scene , as a promotion platform, but also as an industrial development space ". A Basque film industry, in which "it is important that all those involved" work together and "push in the same direction", added Rebordinos.