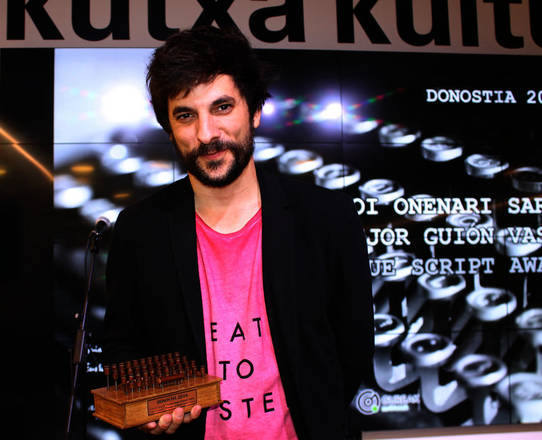 For the third year running, the Basque Screenwriters’ Association is presenting its award for the Best Basque Screenplay, which is awarded to the author of the screenplay of one of the Basque fictional feature films selected for this 65th edition of the San Sebastian Film Festival.

The Jury is composed of three renowned Basque filmmakers; Agurtzane Intxaurraga, Aritz Moreno and David Pérez-Sañudo. Agurtzane Intxaurraga’s career undoubtedly stands out because she was the first Spanish woman to direct an animated feature film (Teresa eta Galtzagorri - Teresa and Tim) but she can also look back on a long career as an actress, director and playwright (Goenkale). Aritz Moreno has directed several short films, for which he has won numerous awards (Portal Mortal - Death Portal) and he is currently directing all kinds of audiovisual projects.David Pérez-Sañudo has focused his career on direction, production and screenwriting for film, television and advertising through his production company, Amania Films (Aprieta pero raramente ahoga - It’s tight but hardly chokes).

The awards will be presented on Thursday, 28th September, from 19:00 at Café Botanika in San Sebastián.This event is open to screenwriters and other professionals from the audiovisual sector attending the San Sebastian Film Festival who want an informal meeting.