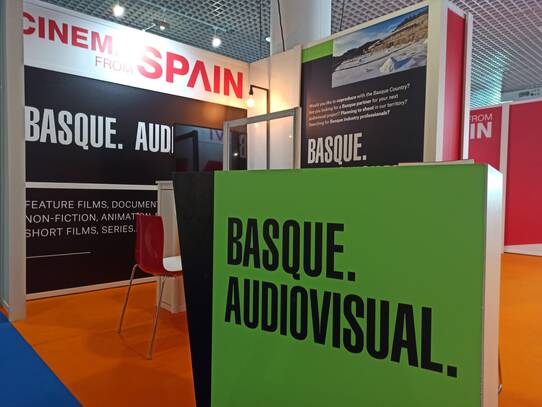 Basque cinema will once again be at the Marché du Film at the Cannes festival, which runs from today until July 15. One of the most outstanding events on the international film scene recovers its face-to-face modality and will once again serve as a showcase for several projects executed in the Basque Country.

In this new edition of the market Basque.Audiovisual. will have a reinforced participation due to its virtual and physical presence at the Palais du Festival. On the one hand, it will have its own virtual section in the Colorful Diversity space, under Cinema From Spain. In it, all professionals in the film and audiovisual sector will be able to access information related to our territory and the existing tools to carry out co-productions, as well as create new contacts.

Also, Basque.Audiovisual. will have a physical space on Rivera A5 of the Palais du Festival. As usual, the latest version of the catalog that includes all the Basque projects currently available, as well as those that are in the development phase, will be distributed amongst those interested. It should be noted that this edition of the catalog is the most extensive of those produced so far, which shows the good creative moment that the sector is going through despite all the difficulties derived from the sanitary situation. On this occasion, in addition to traditional feature films (fiction, documentaries or non-fiction and animation), short films in different stages of development are also collected, as well as the Kimuak selection, the shorts of the ITXITIK call (short films created with COVID19 as thread conductor), series and other formats.

'Los quinquis', by Yayo Herrero, will participate in the next edition of Focus CoPro', an initiative promoted by Cannes Court Métrage - Short Film Corner that will begin on July 12 and in which six international projects participate, two of them from La Incubadora by ECAM. ‘Los Quinquis’ is produced by Mintxo Díaz (Dynamite Films). It is a criminal drama that brings together, in the key of fiction, real stories of various criminals from the Spanish suburbs.

‘Winnipeg seeds of hope’, by Elio Quiroga and Beñat Beitia (Dibulitoon Studio, La Ballesta, El otro Film, Midralgar), will be presented on June 10 in the Animation Days section starting at 12:00 noon, thanks to the collaboration of Animachi financed by ProChile and the Ministry of Culture, Art and Heritage with the Annecy Festival el Marché du Film.

The Marché du Film, which is presented with the aim of continuing to support the international film industry and help professionals, will bring together more than 12,500 participants in total. As in previous editions, it presents a complete program of activities that includes a total of 4,000 films and projects from 121 different countries, and more than 100 workshops and conferences.