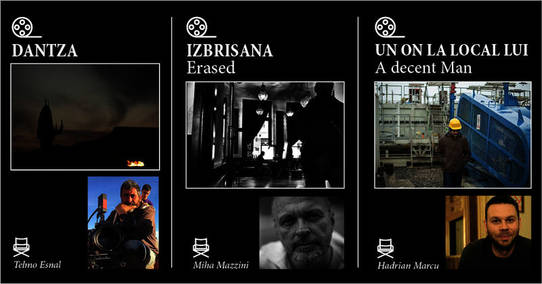 Intended for European films in non-hegemonic languages, Glocal in Progress consists of the exhibition of a selection of three feature films at the post-production stage to an audience of producers, distributors, sales agents and programmers, among other professionals, who can contribute to their completion and international circulation.

GLOCAL CINEMA: How would you describe your film in a few words?

TELMO ESNAL: A story that is danced. A musical in which a narrative is constructed, dance by dance.

MIHA MAZZINI: Personal drama about the violence of the system

HADRIAN MARCU: The film tries to depict a man's failure to understand himself and address the problems he has. The failure to adapt. Failure to progress on a personal level more than anything else.

GC: How did the idea to start this project come about?

TE: The idea came from a conversation with Koldobika Jauregi (a plastic artist with whom I had previously made a documentary for one of his exhibitions at the Guggenheim in Bilbao, ASEDIO-SETIO).  I have been a dantzari (Basque folk dancer) and I have always thought that there should be a film which includes traditional dance. When I found out that Koldobika through the same way, things started to take shape.  I got in touch with Juan Antonio Urbeltz (a teacher and leading researcher in Basque dance) and then I started to have a clear idea of what to do.

MM: I've written a lot of books and I'm used to getting the ideas for them. This one felt more as a duty to me. In 1992 Slovenian government has erased part of the citizens and when I've learnt about this, I said to myself, this story must be told. I hoped somebody else would do it, but nobody did. And what a writer has to do, he has to do – even direct a feature film.

HM: After my last short films I had to take a step back to deal with some personal issues. It took me much longer than I expected, but the interest in film slowly infiltrated back into my mind. I started to look for a starting point, found the novel and then adapted it into something that is closer to my preoccupations. So I'd say it's a personal theme but not autobiographical.

GC: How much time passed between the first and final takes?

TE: We filmed the first piece in March 2014. We were filming for a week and used that material to make a “preview” or “teaser”, which was a key tool for raising funding for the film. The main filming started on 3rd January 2017. We have been filming sequences over the course of the year, in various natural settings, covering the 4 seasons. The last sequence that we filmed was at the end of August. We are yet to film the final sequence, which is planned for the end of December.

HM: We started with a plan for 26 days of shooting, but ended up with only 23 days spread across a month and a half or so.

GC: What is left before the film is complete?

TE: We still have to film a sequence, the one at the end of the film. And all of the audio and music post-production. Seeing at it is a musical, one of the key elements is still missing. We are now working with the composer Pascal Gaigne. We have been editing the images while we have been filming, with Laurent Dufreche. The digital effects are also in progress, but there is still a lot left to do. The closing credits, colour grading, etc. are yet to be done.

MM: Some music, a little bit of editing, final copyright clearance for the song we used, some color grading.

HM: We have a financing gap of around 40.000 EUR to finalize the movie. Color grading, sound design and mix are the things that need to be covered.

GC: What are your expectations from participating in a programme like Glocal in Progress?

TE: We would like it to boost the film’s potential for international distribution; leaving San Sebastian with an international sales agent in the project would be great news. And for one of the top film festivals to be interested in seeing the finished film, so that it can be considered for its programme. And, of course, we want to win the Glocal award, which would help us with the post-production processes that are yet to be completed.

MM: Coming from small country without big budgets and connections, we do hope to present our film to the best eyes posible. Thank you for choosing us.

HM: It is the first time we are showing material outside of our team and we are looking forward to receiving feedback, as well as raising awareness around the project. And last, but not least, to find partners to help us closing the financing and deliver the film.

GC: What next for the film?

TE: The immediate challenges are the music, sound editing and digital effects. Not forgetting that we still have to film the final sequence.

MM: To finish it & try to get to the festivals.

HM: We are currently in the editing room, aiming for picture locked by mid October.

GC: When is it expected to premiere?

TE: It will be in 2018, but it is too soon to set a date. It will depend on how long post-production takes and whether there is any interest from the festivals, where the film could be released.

HM: We are planning the national premiere by autumn 2018, while internationally release earlier same year.