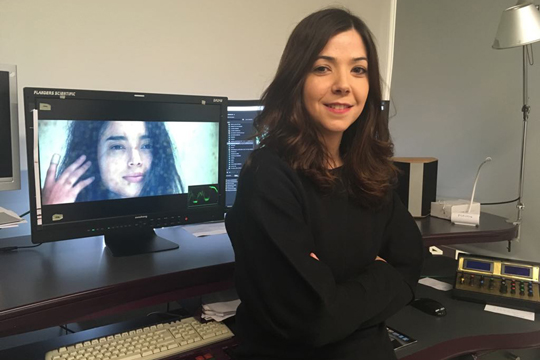 Creating a distribution network that would facilitate the promotion of the short films in our context was the idea behind the Kimuak program when it was launched. Today, on the verge of turning 20 years of that moment, the catalog has a great international prestige and as such is received in the offices of more than a thousand festivals around the world. Esther Cabero, coordinator of the program, accompanies us on the following journey through the history of Kimuak.

What is the origin of the Kimuak initiative? The idea of ​​Kimuak was born at the end of the 90s, at a time when the industry of the short film was professionalized and several authors and titles emerged that later would be of reference. In that decade, the Basque Government granted subsidies to the production of short films, and between 1990 and 1995 it also began to co-produce them, through the company Euskalmedia. In 1997, Amaia Rodríguez, director of creation and cultural dissemination of the Basque Government, and José Luis Rebordinos, director, then, of the Film Unit of Donostia Kultura, saw the need to accompany the short films also in the distribution, since a Once the work was finished, the authors did not have the means to disseminate it. Thus, based on the experiences of Unifrance and the New Zealand Film Commission proposed by José Luis Rebordinos, the Kimuak program was born in 1998, with the aim of promoting, disseminating and distributing the Basque short film both internationally and in the territory itself. What do you read about the 20 years of the project's trajectory? Those initial objectives have been fulfilled and Kimuak has become a brand that is related to quality works. The established formula works, proof of this are the regional and other countries' programs that have emerged from the Kimuak model. Even so, we continuously reflect on the challenges that are presented to us and we try to work in consonance with the changing audiovisual reality. In that sense, we continue adapting those objectives to the present.

What has been the evolution of the Basque short film in this time? Since its inception, Kimuak has had professional-cut short films in its catalog, but many of these professionals were trained and worked outside. Over time this professionalization has been increasing, with the difference that now a large part of the filmmakers and technicians study in Euskal Herria and work here, enriching the audiovisual fabric. At a formal level, nowadays genres tend to intermingle and the borders between fiction, documentary and animation are more diffuse. It is a universal trend, but the avant-garde has more presence in the Basque short film than in other territories. An annual selection of the different works configures the catalog that is later distributed through an international circuit in which the Kimuak label is very well positioned. What has been the key to this recognition? Undoubtedly, the quality of the short films that make up the catalog. Each year, several short films of sufficient quality to compete in the first level are left out of the selection, which is unfair on the one hand, but on the other it means that the Basque production is good enough for Kimuak to maintain its position. The program tries to disseminate these short films as much as possible and it is true that the authors could hardly take charge of this diffusion through other channels, but Kimuak ultimately forms his stamp thanks to the talent of Basque cinema. What is the profile of the professionals who seek the intermediation of Kimuak? In recent editions, only short films with an amateur profile have been presented. There has been a remarkable evolution in terms of the professionalization of the sector and this has increased the overall quality of the candidates. Also, the authors are of all ages, from graduate students to consecrated filmmakers who work indistinctly with the short and long format. They are professionals who seek to make their work visible while they continue to develop their projects. What doors open for those who get their work recognized in the catalog? Being part of the catalog means that authors can show their work in all corners of the world and can be known in the international industry. Kimuak has a database of more than a thousand festivals and its selection reaches the entire planet, which gives the authors a lot of visibility. In addition, when they travel to present the short films they also expand their network of contacts. On the other hand, the significant savings of time and money in the distribution allows filmmakers and teams to focus on their upcoming work.

In 2014, a panoramic study on the development and evolution of the program was published by Iñaki Lazkano, Nekane E. Zubiaur and Ainhoa ​​Fdz. of Arroyabe. What were the conclusions of this analysis? What role has the publication played in spreading your work? The study «Short films of Kimuak. Seeds of Basque cinema »is very exhaustive and has allowed us to visualize the history and the short films that Kimuak has formed as a whole. For us, it has been a good tool to reflect on the path taken. It is also positive to offer this publication for study and use in the academic field. Currently the University of Reno (Nevada, USA) is doing the English translation, which will allow us to reach more international students and researchers. Promotion, dissemination and distribution have been the three project guidelines since its inception. Are there new ways to go to consolidate the Basque short film industry? Although the previous phases, of development and production of projects, are already covered by the Basque Government and other institutions, there are still many ideas that do not find funding and do not materialize. From Kimuak what saddens us the most is not being able to attend to those works that are not selected, which undoubtedly deserve dissemination and visibility. Another pending issue continues to be the creation of audiences, to ensure that the public perceives the artistic and cultural value of the short film and that it has an audience beyond festivals and punctual consumption via the Internet.