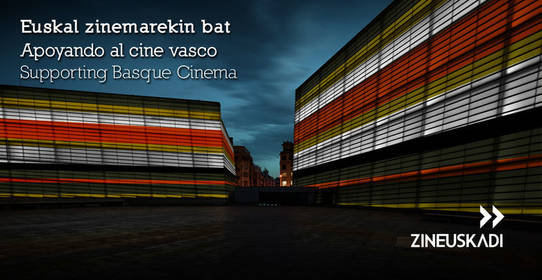 Zineuskadi began its journey in 2011, taking over the reins of what was then Media Antena Euskal Herria. In 2012, it launched its Zinema Euskaraz programme, aimed at ensuring the commercial release of films in the Basque language. It arranged the first grants for promoting and advertising fictional and animated feature films and creative documentaries, and grants to give cinemas access to copies of European and Latin American films.

The activities carried out over the course of these years include jointly organising the first workshops and training sessions (2013) together with the Creative Europe Basque MEDIA Desk’s office and coordinating the Glocal Cinema programme.

Zineuskadi wholeheartedly supports the Basque audiovisual sector, so it has signed partnership agreements with Topagunea, Bilbao Mendi Film Festival and Euskal Zine Bilera (2013); San Sebastian-Donostia Culture / Filmazpit (2014), the Basque Association of Cinemas-EZAE (2015) and Euskal Kultur Erakundea (2016). It also works closely with EITB, Filmoteca Vasca and the San Sebastian Film Festival. Thanks to the Zinema Euskaraz programme, the film “Pan” was the first US film to be commercially released in the Basque language by Warner in 2015.

In the last two years, Zineuskadi has attended the Berlinale’s European Film Market, through the brand Basque Audiovisual, and the Film Market at the Cannes Festival. This year, it is consolidating its presence at the San Sebastian Film Festival with a cocktail party designed to bring the various actors in the industry closer together. It aims to promote Basque cinema and celebrate the presence of Basque films in the 65th edition of the San Sebastian Film Festival.