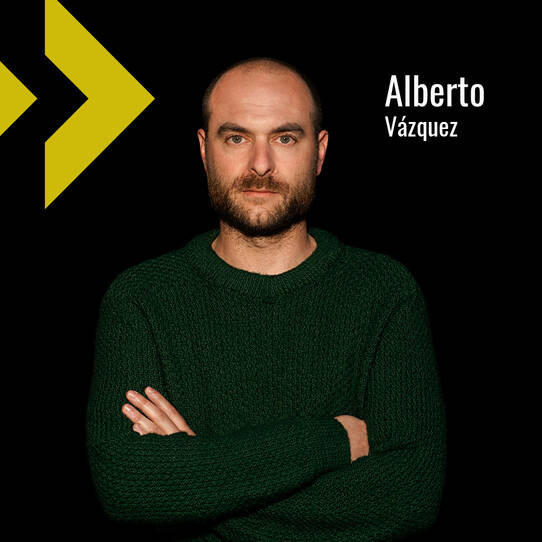 With his nomination for the Goya Award for Best Animation Short, Alberto Vázquez rounds off the great year he has lived with his work 'Homeless Home', a project with which he has managed to make history and which has allowed him to be present at the most international festivals. We spoke with the filmmaker from A Coruña about the short and his plans for the future.

Zineuskadi: How did you receive the news that you had been nominated?

Alberto Vázquez: We watched the gala online because we knew we had possibilities, since our short has had a good run. Among other recognitions, it has won the Jury Prize of the Annecy Festival, the most important animation festival in the world, which was a very strong accolade. Now we are working on a film between several sestudios, and we watched the gala from the Galician office, with the team, since part also repeats in this new project. We were very happy and toasted this nomination.

Zineuskadi: In view of the great results that the short film is having, what options do you see of being able to get hold of the ‘big head’?

Alberto Vázquez: Statistics tell you what options there are (laughs). We have a good international tour, with several prestigious awards, which can be positive. What happens with this award is that 1,600 academics vote, that not everyone is going to see the short films, and it also depends a lot on the personal support that you may have. We, being Basque and Galician, are a bit on the periphery, because most are or live in Madrid. But we have already won more Goyas, we have a journey as a company, also the producer, myself as a director, the team… so I do think we have possibilities.

Zineuskadi: 2020 was a difficult year for the sector, but the truth is that you, with 'Homeless Home', have done very well ...

Alberto Vázquez: It has been a very bad year for feature film premieres especially. In the case of shorts, their premieres are usually at festivals, which although many are online, they are being made. It is not the same, because you cannot travel to the sites, you cannot present your project, talk about it… although you can do online interviews. It is what we have had to live; we have had to adapt and accept it.

Zineuskadi: For all those who have not had the opportunity to see the short, how would you present it to them?

Alberto Vázquez: It is a work of about 15 minutes that is contextualized in a medieval fantasy world starring demons, witches, orcs ... but its theme and the problems of the characters are completely contemporary. For example, an economic and social crisis that makes them return to their hometowns, addiction problems, some young people who have to return to take care of their parents who are sick ... The idea was to play with this medium of medieval fantasy, but to talk about current issues. Therein lies the game of the short, it is intimate and social within a genre in which that is not usually done. All part of what they call depopulated Spain, which are these towns that have been in decline because they have been emptied.

Zineuskadi: What balance do you make of what you are achieving?

Alberto Vázquez: He's being great. The truth is that all our jobs are having a very good journey. 'Homeless Home' continues in line with the previous ones. It's a long-distance race: it's the fourth short we do; We have also made a feature film, now we are with the second, and everything is getting better, because we also improve. From the first short to this we have improved a lot; every time we have a higher level, more contacts and more media. This last short film has been a very big leap in terms of financing; It is a French-Basque co-production and the collaboration allows the money you have to double.

Zineuskadi: Although it finally could not be, the Annecy Festival itself selected you as candidates for the Oscars.

Alberto Vázquez: That's right. We knew it was difficult, the Oscars usually select a type of short film from the orbit of Pixar, Disney ... of larger companies and that, in addition, tend to have a whiter message. Our short film is quite dark; there is sex, there is violence, and that is difficult to see. We really do not make shorts to win Oscars or Goyas, because otherwise we would make other types of products, more childish, for all audiences ... If that were my goal, I would change the way I approach the stories and what I want to tell, but since it is not , we remain true to our spirit. Everything you give us will always be appreciated.

Zineuskadi: You mentioned that you are working on a feature film. Can you tell us about the projects you have in hand?

Alberto Vázquez: I've been working for three years on a project that is now in the production phase. We plan to release it in 2022. It is called ‘UnicornWars’, which means the war of the unicorn, and is a kind of warlike and epic fable about a war between bears and unicorns in a magical forest. It is a kind of reinterpretation of some of the films that have marked me, such as ‘Apocalypse now’ or ‘Platoon’. We are very happy because it is a project that has generated a lot of expectation within the animation sector, and we have already presented it at very important festivals.