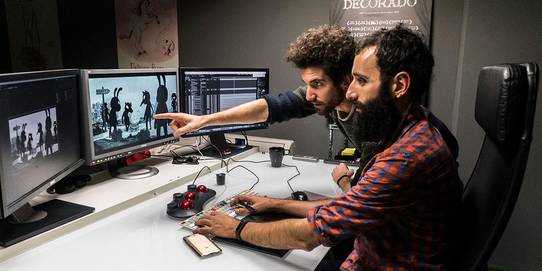 Iván Miñambres, producer of 'Homeless Home', shares what participating in the Annecy Festival means to him, and takes stock of his career and the industry’s current situation.

Zineuskadi: What does it mean to be selected for a festival like Annecy?

Ivan Miñambres: Because of both its film festival and its market (MIFA), Annecy is the top international event for anyone producing animated content.

It is often called the “Cannes of Animation” since the entire focus of the industry is placed on this event. You could say that it’s really tough for your content to be relevant if you don’t participate.

At UniKo we’ve been lucky that almost all our productions have been selected in official competition, and they have always helped us establish a network of contacts for successful distribution, to find partners for future productions, content sales, etc.

Moreover, as a spectator, it is a delight to see so much content and so much diversity. It's very inspiring. Of course, it’s exhausting. We’re looking forward to seeing how this year's online version works.

Zineuskadi: A new collaboration with Alberto Vázquez and a co-production with France. How did the project come about?

Ivan Miñambres: We've been working with Alberto for ten years now, when we made the short film "Birdboy". We're in constant contact, we really like his personal universe, we identify with his narrative style, and above all we understand and respect each other, which is the cornerstone for a long-term director-production relationship.

In this case, "Homeless Home" was a story that Alberto had been developing that represented a major turn in his aesthetic and narrative approach. We loved it from the start for its subject matter and its staging, but at the time we were swamped putting "Unicorn Wars", our next feature film, on the market, and it wasn’t feasible to do it in the same time frame.

Because we belong to an extremely unstable industry in which projects sometimes speed up or are set back in an unpredictable way, we had to bring forward "Homeless Home" before "Unicorn Wars" to keep the team from coming to a standstill. The response was spectacular, we financed it very quickly together with France to make it with all the guarantees possible, and we were able to develop the project in seven months, which will be released internationally at the upcoming edition of Annecy, and at a domestic level at Animario.

Zineuskadi: How complicated is it still to develop adult animation projects? What was the most challenging production phase?

Ivan Miñambres: There is no easy production, each one has its own complexity.

In terms of structure and volume, feature films always cost more. The budgets are high and it's difficult to finance them. We have to put together pieces of a puzzle to balance deadlines, needs, and regions in order to make them viable.

Besides, we live in a region that doesn’t have the culture of consumption of independent animated content like there is in other European countries, the USA, Asia… if we watch an animated film, we always assume that it was made for a young audience. And it doesn't have to be like that; animation is simply a technique. Why can't we talk about human relationships, armed conflict, or fear of the future?

I don't blame the audience. To make a comparison with agriculture, if we always plant potatoes on the same land for decades, the land will be converted into this single crop and planting any other crop will be extremely difficult. As producers and exhibitors, we have an obligation to offer content that moves away from a single crop and presents a wide range to the audience.

Zineuskadi: Starting on 15 June, you’ll experience what it’s like to participate in a virtual festival...

Ivan Miñambres: Yes, we’re waiting to see how it all will go. The registration, the lectures, the screenings, the networking...the numbers that Annecy handles are overwhelming and I’m dying to see how this massive amount of information and interactions will be transferred to the online world.

The festival team has been in the business for 60 years and they’re industry leaders. I’m sure that what they do will be excellent. Who knows if they will create new possibilities or consider new paradigms? There are always new opportunities in a crisis.

What does it mean to have hits like “Psychonauts: The Forgotten Children” and “Decorado” over the course of your career?

Ivan Miñambres: In terms of the potential for creating new projects or making it easier, I wouldn't say that it means having free reign to do whatever we want. It's true that it helps to reach certain places that otherwise wouldn't have opened their doors, but it's still very difficult to develop indie animation.

For example, after winning two Goyas in the same year, having distribution in the US, co-production with France, support from TVE, distribution in theatres, etc., neither ETB nor the Basque Government supported our next animated feature film "Unicorn Wars". I hope and pray that in the end they can be involved in the film; it’s a shame that projects created domestically with great international reach are excluded from this type of support.

On the other hand, it’s massive in terms of personal and professional satisfaction. To have been able to participate in these productions, to have the technical resources and staff behind them, as well as to enjoy their international journey, is an unforgettable personal experience. I have grown and learned a lot along the way.

I believe that these films had to exist, and that the response from the audience has been so positive that it’s a source of pride for the entire team.

Zineuskadi: Despite the fact that the entire audio-visual industry is at a standstill, it seems that animation has managed to keep up its momentum. However, how do current lockdown measures affect ongoing projects, such as “Unicorn Wars”?

Ivan Miñambres: In animation, we're lab rats. Our work is based on exceptionally long processes and, even though we work as a team, we usually work alone.

For example, the "shooting" phase can take around a year, when it usually takes one to three months at best for feature films.

This situation gives us a competitive advantage. With solid technical infrastructure each professional can continue to produce from a geographical point of view, something that was quite common when we co-produced with other regions before this situation.

That way, even though feature films had to stop shooting, fortunately we can continue to move forward and produce.

I think it's time that television stations and other institutions learn how to read this situation and do not cut support for animated content. At an international level, it’s an industry with huge development potential and increasing support and incentives. We’re in a moment of crisis, but at the same time a moment of opportunity. We can’t be left behind.